Chris Madsen (1851 – 1944). Lawman of the Old West who is best known as being one of The Three Guardsmen, the name given to Madsen and two other Deputy US Marshals who were responsible for the apprehension and/or killing of several outlaws of that era. The Three Guardsmen consisted of Madsen, Bill Tilghman, and Heck Thomas.
He was born Christen Madsen Rørmose in Denmark. After his graduation from Kauslunde Agricultural School, Madsen started a criminal career, resulting in several convictions for fraud and forgery. Upon emigrating to the United States in 1876, he dropped the last name, Rørmose.
In 1891, he became a deputy U.S. marshal under Marshal William Grimes in Oklahoma Territory. Over 300 outlaws were either apprehended or killed by Madsen, Thomas and Tilghman, thus leading to their nickname, The Three Guardsmen. The three lawmen were largely responsible for bringing down outlaw Bill Doolin and his Doolin Dalton gang. Madsen was personally responsible for the killings of Doolin gang members Dan "Dynamite Dick" Clifton, George "Red Buck" Waightman, and Richard "Little Dick" West.


- "A red-haired Dane who had fought with the Italian rebel Garibaldi and served in the French Foreign Legion named Chris MAdsen also joined the team."  https://books.google.it/books… 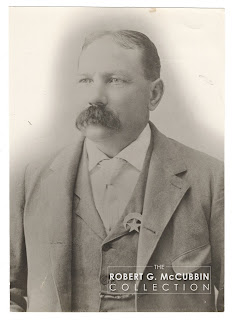