Alice Geraldine Farrar (1882 – 1967). American soprano opera singer and film actress, noted for her beauty, acting ability, and "the intimate timbre of her voice."
She recorded extensively for the Victor Talking Machine Company and was often featured prominently in that firm's advertisements. She was one of the first performers to make a radio broadcast in a 1907 publicity event singing over Lee De Forest's experimental AM radio transmitter in New York City. She also appeared in silent movies, which were filmed between opera seasons. Farrar starred in more than a dozen films from 1915 to 1920, including Cecil B. De Mille's 1915 adaptation of Georges Bizet's opera Carmen, for which she was extensively praised. One of her other notable screen roles was as Joan of Arc in the 1917 film Joan the Woman.
Farrar had a seven-year love affair with the Italian conductor Arturo Toscanini. She was close friends with the star tenor Enrico Caruso and there has been speculation that they too had a love affair, but no conclusive evidence of this has surfaced. It is said that Caruso coined her motto: Farrar farà ("Farrar will do it"). 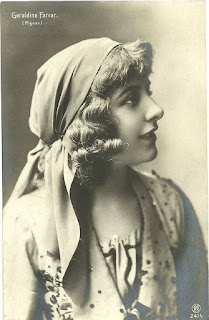