John Francis Hylan (1868 – 1936). 96th Mayor of New York City (the seventh since the consolidation of the five boroughs), from 1918 to 1925. From rural beginnings in the Catskills, Hylan eventually obtained work in Brooklyn as a laborer on the elevated railroad. During his nine years with the company, he worked his way to engineer, and also studied to earn his high school diploma then his law degree. He practiced law for nine years and also participated in local Democratic politics.
In 1917 with the consent of Tammany and William Randolph Hearst, he was put forward as a Brooklyn Democratic candidate for Mayor and won the first of two terms. He was re-elected with a wide plurality, which swept many Brooklyn Democrats into office. His chief focus in office was to keep subway fares from rising. By the end of his second term, however, a report by a committee appointed by Governor Al Smith severely criticized his administration's handling of the subway system. Tammany ran Jimmy Walker against him for the Democratic nomination and Hylan lost. Walker appointed him to the Children's Court where he sat for many years. After his term as mayor, Hylan spent much time attacking the "interests," arguing that industrial concentration gave great power to individuals to influence politics and impoverish the working poor.

- "But the red-haired mayor and the philandering media mogul were more than just political allies."  https://books.google.it/books… 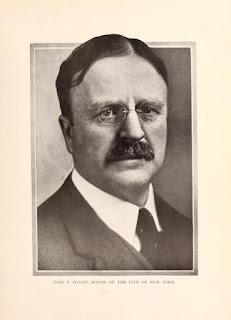