Sibyl Sanderson (also spelt Sybil, 1864 – 1903). American operatic soprano during the Parisian Belle Époque.
She was Jules Massenet's favorite soprano and appeared in the premieres of a number of his operas, the roles having been created for her unique talents (her professional debut took place in Paris in the title role in Esclarmonde). She was also a famous interpreter of Manon, Massenet's most enduring opera.
Sanderson was also admired by Camille Saint-Saëns, who wrote the title role in Phryné for her. Success outside of Paris was elusive for Sanderson; she appeared at Covent Garden and the Metropolitan Opera (debut in title role of Manon on January 16, 1895, the last performance as Juliette in Roméo et Juliette on December 31, 1901) to lackluster reviews.
In 1897 she married a Cuban millionaire and sugar heir Antonio E. Terry (d. 1899), after which she temporarily halted her operatic activity, making an unsuccessful comeback two years later.


- "At the Metropolitan it had been sung exclusively by a red-haired American from the Ecole Marchesi called Sybil Sanderson."  https://books.google.it/books…

- "That beautiful American with red hair would become his favorite performer."   https://www.francemusique.com/…/10-little-you-perhaps-do-no… 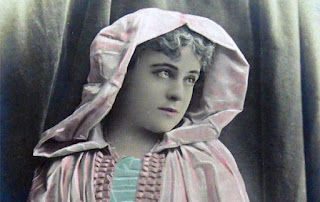