John McCormick (1936 – 2017). Scottish professional footballer. Playing as a centre back he made a total of 334 appearances in the Football League and Scottish League, for Third Lanark, Aberdeen and Crystal Palace before moving into non-league football with Wealdstone.

- "His red hair did not belie John's temper and Glasgow upbringing and, quick as a flash, he was on his feet..."   https://fypfanzine.uk/…/6784-in-memory-of-john-mccormick-a-… 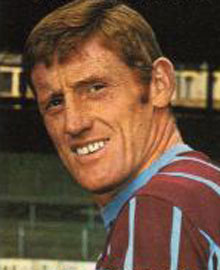