Charles Montagu Doughty (1843 – 1926). English poet, writer, explorer, adventurer and traveller.
He is best known for his 1888 travel book Travels in Arabia Deserta, a work in two volumes that, although it had little immediate influence upon its publication, slowly became a kind of touchstone of ambitious travel writing, one valued as much for its language as for its content. T. E. Lawrence rediscovered the book and caused it to be republished in the 1920s, contributing an admiring introduction of his own. Since then, the book has gone in and out of print.
Among authors who have praised the book are the British novelist Henry Green, whose essay on Doughty, "Apologia," is reprinted in his collection Surviving.
He was awarded the 1912 Royal Geographical Society's Founder's Gold Medal for his travels and writings.

- "He is said to have been physically awkward and self-conscious, having conspicuous bright red hair."  https://books.google.it/books… 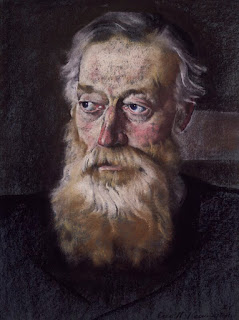