Sylvester Laflin "Pat" Weaver, Jr. (1908 – 2002). American radio advertising executive, who became president of NBC between 1953 and 1955. He has been credited with reshaping commercial broadcasting's format and philosophy as radio gave way to television as America's dominant home entertainment. His daughter is actress Sigourney Weaver.
He was of Scottish descent (possibly Clan MacFarlane), as well as of Ulster-Scots and early New England ancestry.
He was a descendant of Charles Laflin, a gunpowder manufacturer, who came to America in 1740 from Ulster, Ireland, settling at Oxford, Massachusetts.

- "He stood six-foot-four and was lean and energetic, with short-cropped, curly red hair now flecked with gray..."  https://books.google.it/books… 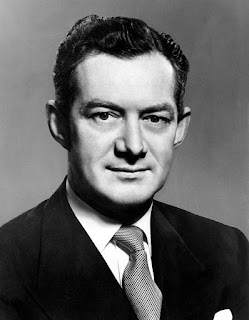