Hugh Miller (1802 – 1856). Self-taught Scottish geologist and writer, folklorist and evangelical Christian.
Though he had no academic credentials, he is today considered one of Scotland's premier palaeontologists.


- "Miller's nickname amongst scientists and publishers was “Old Red.” He was appropriately named, for he had abundant, unruly red hair."  http://www.fossilnews.com/hugh-millers-old-fish-story/

- "... was known affectionately by his friends as Old Red, both on account of his shock of red hair and his insightful, ground-breaking work into the vast sandstone deposits across Scotland that bear the same name."  https://www.scottishgeology.com/robert-macfarlane-on-hugh-…/ 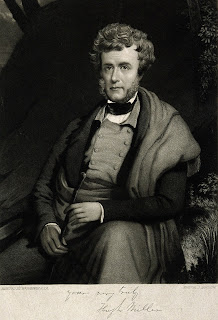