Algernon Sidney or Sydney (1623 – 1683). English politician and member of the middle part of the Long Parliament. A republican political theorist, colonel, and commissioner of the trial of King Charles I of England, he opposed the king's execution. Sidney was later charged with plotting against Charles II, in part based on his most famous work, Discourses Concerning Government, used by the prosecution as a witness at his trial. He was executed for treason. After his death, Sidney was revered as a "Whig patriot–hero and martyr".
The works of Algernon Sidney, along with those of contemporary John Locke, are considered a cornerstone of western thought. The ideas Discourses Concerning Government put forth survived Sidney's death and ultimately culminated in the founding of the United States. Sidney directly opposed the divine right of kings political theory by suggesting ideas such as limited government, voluntary consent of the people and the right of citizens to alter or abolish a corrupt government. Discourses Concerning Government has been called "the textbook of the American revolution."

- "He was tall and thin, and in his youth he had red hair."  https://www.libertarianism.org/…/popular-sovereignty-biogra… 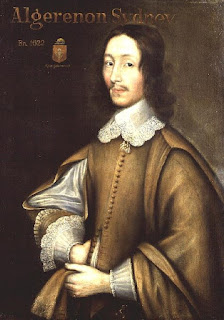