Princess Marie-Louise Thérèse of Savoy-Carignan (1749 – 1792). Member of a cadet branch of the House of Savoy. She was married at the age of 17 to Louis Alexandre de Bourbon-Penthièvre, Prince de Lamballe, the heir to the greatest fortune in France. After her marriage, which lasted a year, she went to court and became the confidante of Queen Marie Antoinette. She was killed in the massacres of September 1792 during the French Revolution.

- "The red-haired Princess Lamballe had just fallen victim to an antiroyalist mob..."  https://books.google.it/books…

- "... the leaders of the mob that hacked the Princess de Lamballe to pieces stood over Marie while she took a cast of the severed head, its auburn hair horribly smeared with blood."  https://www.historytoday.com/richard-c…/death-madame-tussaud 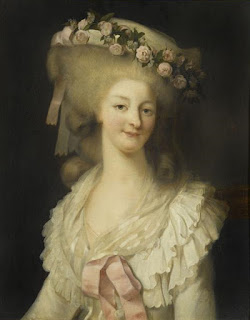