Joseph Brodsky (Iosif Aleksandrovich Brodsky, 1940 - 1996). Russian and American poet and essayist.
Born into a Russian Jewish family in Leningrad in 1940, Brodsky ran afoul of Soviet authorities and was expelled ("strongly advised" to emigrate) from the Soviet Union in 1972, settling in the United States.
He taught thereafter at Mount Holyoke College, and at universities including Yale, Columbia, Cambridge and Michigan.
Brodsky was awarded the 1987 Nobel Prize in Literature "for an all-embracing authorship, imbued with clarity of thought and poetic intensity". He was appointed United States Poet Laureate in 1991.
According to Professor Andrey Ranchin of Moscow State University: “Brodsky is the only modern Russian poet whose body of work has already been awarded the honorary title of a canonized classic... Brodsky's literary canonization is an exceptional phenomenon. No other contemporary Russian writer has been honored as the hero of such a number of memoir texts; no other has had so many conferences devoted to them”.

- "Brodsky's mentor, Anna Akhmatova, laughed at the KGB's shortsightedness. "What a biography they're fashioning for our red-haired friend!" she said." https://en.wikipedia.org/wiki/Joseph_Brodsky

- "In November, 1963, an article appeared in the local paper insulting Brodsky, his trousers, his red hair, his literary pretensions, and his poems..."  https://www.newyorker.com/…/2011/05/23/the-gift-keith-gessen

- "Brodsky, wearing a corduroy jacket, had thinnig reddish hair and the sort of pale skin, stippled with frekels, that seemed never to habe been out in the sun."  https://books.google.it/books… 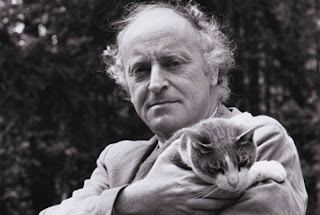