Albert Arthur Powell ( 1900 – 1982), known as Sandy Powell. English comedian best known for his radio work of the 1930s and for his catchphrase "Can you hear me, mother?".
In the 1930s he began to work on the radio, always introducing his show with the catchphrase "Can you hear me, mother?". Powell said that the catchphrase originated on an occasion when he had dropped his script and was killing time at the microphone while rearranging the pages. It is also attributed to his mother's coercion and her hardness of hearing, during his early career. At his next booking, the theatre manager asked him to say it again as everyone was saying it now. He also appeared in a number of films during the 1930s, usually as himself. In 1939 he was voted the fifth most popular British star at the local box office.
A popular figure, he worked continually on radio, television and pantomime through the 1940s and 1950s.


- "His stage name Sandy came from his red hair."  http://webcache.googleusercontent.com/search… 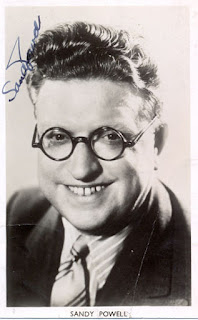