Donald Frederick Sandys Wunsch (1887 – 1973). English-born New Zealand chemical engineer and factory manager.
In the 1957 New Year Honours he was appointed an Officer of the Order of the British Empire in recognition of his role as chairman of the Advisory Council of Scientific and Industrial Research.
In 2010, IChemE in New Zealand instituted the annual Kennedy-Wunsch lecture, in recognition of the pioneering roles that both Wunsch and Miles Kennedy played in the development of chemical engineering in New Zealand.


- "With his red hair and beard and piercing blue eyes, chemical engineer Donald Sandys Wunsch was a distinctive figure in Edendale..."  https://teara.govt.nz/…/photogra…/39814/donald-sandys-wunsch

- "A tall, thin man with a shock of red hair, a bushy red beard and very blue, intelligent eyes, Donald Sandys Wunsch wore small glasses, English tweed knickerbockers, and was rarely seen without a pipe in his mouth."  https://teara.govt.nz/…/biographies/4w28/wunsch-donald-fred… 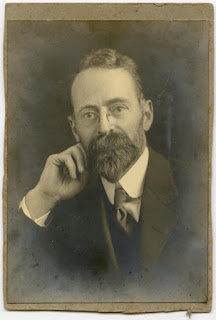