Sir Eyre Alexander Barby Wichart Crowe (1864 – 1925). British diplomat. He was a leading expert on Germany in the Foreign and Commonwealth Office. He is best known for his vigorous warning, in 1907, that Germany's expansionist intentions toward Britain were hostile and had to be met with a closer alliance ("Entente") with France.
Crowe organized the Ministry of Blockade during the World War, and worked closely with French President Georges Clemenceau at the Supreme Council at the Paris Peace Conference in 1919.
Lloyd George and Crowe's rivals in the Foreign Office tried to prevent Eyre's advancement: but, as a consequence of his patronage by Lord Curzon, Eyre nevertheless served as Permanent Under-Secretary at the Foreign Office from 1920 until his death in 1925.


- "... or Eyre Crowe, a career clerck, whose flaming red hair, crushed under an ancient Borsalino hat, was hardly to miss..." https://books.google.it/books… 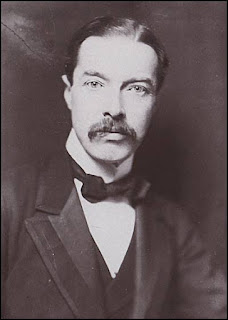