Geoffrey V (1113 – 1151) — called the Handsome or the Fair and Plantagenet. Count of Anjou, Touraine, and Maine by inheritance from 1129 and then Duke of Normandy by conquest from 1144. By his marriage to the Empress Matilda, daughter and heiress of Henry I of England, Geoffrey had a son, Henry Curtmantle, who succeeded to the English throne as King Henry II (1154-1189) and was the first of the Plantagenet dynasty to rule England; the name "Plantagenet" was taken from Geoffrey's epithet. His ancestral domain of Anjou gave rise to the name Angevin for three kings of England (Henry II his son and heir, and Henry's sons Richard and John), and what became known as the Angevin Empire in the 12th century. Son of Fulk V.

- "On his wedding day, Geoffrey of Anjou was a tall, bumptious teenager with ginger hair, a seemingly inexhaustible natural energy and a flair for showmanship. His fair-skinned good looks earned him the sobriquet Le Bel. Tradition also has it that he liked to wear a sprig of bright yellow broom blossom (planta genista in Latin) in his hair, which earned him another nickname: Geoffrey Plantagenet...." http://spartacus-educational.com/MEDstephen.htm 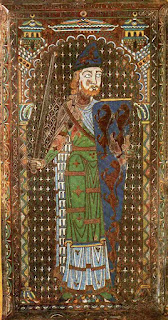