Ferdinand III (1608 – 1657). Holy Roman Emperor from 15 February 1637 until his death, as well as King of Hungary and Croatia, King of Bohemia and Archduke of Austria. Son of Ferdinand II and Maria Anna of Bavaria. Husband of Maria Leopoldine of Austria-Tyrol, Maria Anna of Spain and  Eleonora Gonzaga the Younger.
Brother of Cecilia Renata of Austria.

- "This detail could well underpin Knox's identification of the man as Ferdinand III in the final version, particularly because he, like the deceased Emperor, had red hair." https://books.google.it/books… 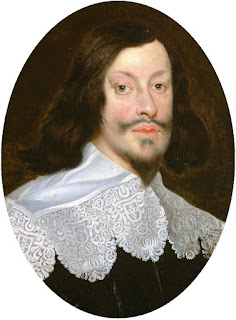