Major General James Wolfe (1727 – 1759). British Army Officer, known for his training reforms and remembered chiefly for his victory in 1759 over the French at the Battle of the Plains of Abraham in Quebec.
His service in Flanders and in Scotland, where he took part in the suppression of the Jacobite Rebellion, brought him to the attention of his superiors. The advancement of his career was halted by the Peace Treaty of 1748 and he spent much of the next eight years on garrison duty in the Scottish Highlands. Already a brigade major at the age of 18, he was a lieutenant-colonel by 23.

The outbreak of the Seven Years' War in 1756 offered Wolfe fresh opportunities for advancement. His part in the aborted raid on Rochefort in 1757 led William Pitt to appoint him second-in-command of an expedition to capture the Fortress of Louisbourg. Following the success of the Siege of Louisbourg he was made commander of a force which sailed up the Saint Lawrence River to capture Quebec City. After a long siege Wolfe defeated a French force under the Marquis de Montcalm, allowing British forces to capture the city. Wolfe was killed at the height of the Battle of the Plains of Abraham due to injuries from three musketiers.
Wolfe's part in the taking of Quebec in 1759 earned him lasting fame, and he became an icon of Britain's victory in the Seven Years' War and subsequent territorial expansion. He was depicted in the painting The Death of General Wolfe, which became famous around the world. Wolfe was posthumously dubbed "The Hero of Quebec", "The Conqueror of Quebec", and also "The Conqueror of Canada", since the capture of Quebec led directly to the capture of Montreal, ending French control of the country.

- "His bright red hair, a legacy of his Anglo-Welsh ancestry, was pulled back from his angular face and tightly clubbed into a black-ribboned cue at the back."  https://www.h-net.org/reviews/showrev.php?id=14658

- "He had flaming red hair, and in contrast to the custom of the time, Wolfe never wore a wig."
http://www.uppercanadahistory.ca/wm/wm2.html

- "He was often audacious in the execution of his craft, but the slight, red-haired young man was bookish and reserved in person."  https://www.u-s-history.com/pages/h1183.html

- "Wolfe was tall and slight, of Celtic type, and wore his red hair undisguised."
https://en.wikisource.org/wiki/Wolfe,_James_(DNB00) 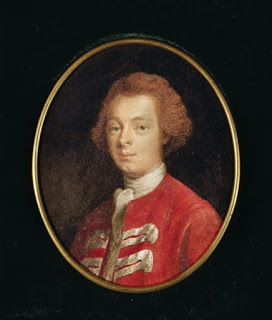 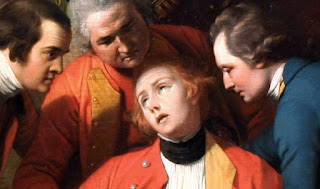