Henry II of England (1133 – 1189), also known as Henry Curtmantle, Henry FitzEmpress or Henry Plantagenet. King of England from 1154 to his death.
He was the first king of the House of Plantagenet. King Louis VII of France made him Duke of Normandy in 1150. Henry became Count of Anjou and Maine upon the death of his father, Geoffrey of Anjou, in 1151. His marriage in 1152 to Eleanor, Duchess of Aquitaine, whose marriage to Louis VII had recently been annulled, made him Duke of Aquitaine. He became Count of Nantes by treaty in 1185. Before he was 40 he controlled England, large parts of Wales, the eastern half of Ireland and the western half of France—an area that would later come to be called the Angevin Empire. At various times, Henry also partially controlled Scotland, Wales and the Duchy of Brittany.
Son of Geoffrey V. Father of Richard the Lion Heart, John Lackland, Joan of England and Henry.

- "A short but strongly built man of leonine appearance, Henry II was possessed of an immense dynamic energy and a formidable temper. He had the red hair of the Plantagenets, grey eyes that grew bloodshot in anger and a round, freckled face. Described by Peter of Blois as:-
"The lord king has been red-haired so far, except that the coming of old age and gray hair has altered that color somewhat..." http://www.englishmonarchs.co.uk/plantagenet.htm

- "He was a stocky, red-haired youth with a piercing stare and bursting with virility."   https://books.google.it/ 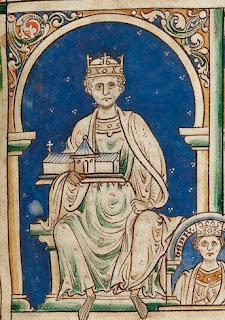