Ramesses II, also known as Ramesses the Great (c. 1303 BC - 1213 BC). Third pharaoh of the Nineteenth Dynasty of Egypt. Son of Seti I. He often is regarded as the greatest, most celebrated, and most powerful pharaoh of the Egyptian Empire.


"Microscopic inspection of the roots of Ramesses II's hair proved that the king's hair originally was red, which suggests that he came from a family of redheads This has more than just cosmetic significance: in ancient Egypt people with red hair were associated with the deity Seth, the slayer of Osiris, and the name of Ramesses II's father, Seti I, means "follower of Seth." 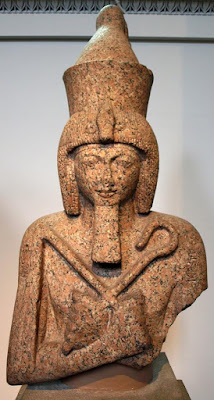