- “With arms akimbo and feet apart, she could lecture with that throaty voice or laugh gloriously, throwing her red mane around for effect.” http://myromancewithmovies.blogspot.it/…/…/ann-sheridan.html

- “I had no photo of Ann Sheridan, but I knew she was a sexy red head and my paint job emphasized that hair. …” http://usoonpatrol.org/…/02/04/americas-oomph-girl-was-a-uso


- “Her red hair, which photographs brown, is less spectacular than Jean Harlow's…” http://www.ann-sheridan.com/An…/Ann_Sheridan_Life_Story.html 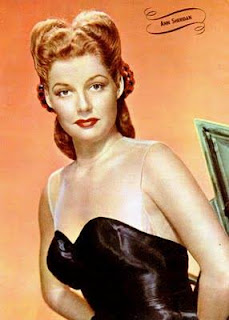