Michel Ney (1769 – 1815), popularly known as Marshal Ney. French soldier and military commander during the French Revolutionary Wars and the Napoleonic Wars. He was one of the original 18 Marshals of the Empire created by Napoleon.

According to Wikipedia, he was known as Le Rougeaud because he was "red faced" or "ruddy", but:

- "Marshal Ney, well known for his red-hair, had the habit of combing his hair in a similar style, in order to hide a scar at the same place." http://www.napoleonicsociety.com/english/neya.htm

- "The Red Lion was, of course, Michel Ney [...] Le Rougeaud, another nickname referring to his red hair and ruddy cheecks..." https://books.google.it/books… 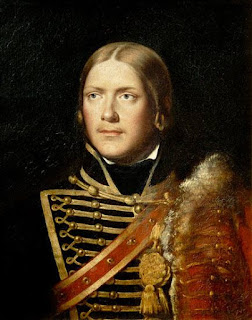