Emily Elizabeth Dickinson (1830 – 1886). American poet. With the possible exception of Walt Whitman, Dickinson is now recognized as the most important American poet of the 19th century.

- "'Because people see that black-and-white photograph, it's always amazing to them that she had red hair - a beautiful shade of red. It's auburn, not carrot red, but auburn." http://www.paulvermeersch.ca/…/emily-dickinson-was-redhead.…

- "For the film, the team asked artist Elizabeth Pols, of Belchertown, to paint a version of the photo that would show a more mature Dickinson, with the red hair mentioned in letters." http://www.masslive.com/…/emily_dickinson_documentary_to.ht…


- "But the picture is misleading for another reason: color. Emily Dickinson's hair was auburn, and apparently earlier on it was downright red. Amherst College owns a lock of her hair..." http://loosesignatures.blogspot.it/…/cool-thing-2-emily-dic…

- "Emily Dickinson stood about five feet four inches tall and was of slender to medium build. She had fine, wavy chestnut-red hair..." https://books.google.it/books…

Here you can read about Dickinson's hair. 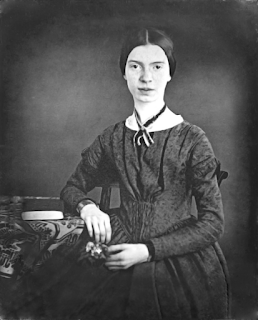