- "She died eighteen years to the day after Georgiana, and when she died she wore about her neck a locket bearing one of Georgiana's reddish-gold curls..." http://www.cherylbolen.com/georgiana.htm

- "...she was built like a Tudor (tall, big-boned, and red-haired)..." http://gossamerobsessions.blogspot.it/…/history-vs-romance-… 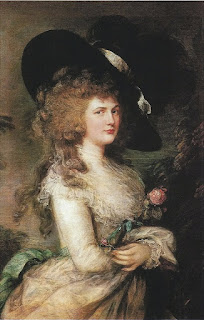