Richard I (1157 – 1199). King of England. He was known as Richard Cœur de Lion or Richard the Lionheart because of his reputation as a great military leader and warrior. Son of Henry II, King of England and his queen consort, Eleanor of Aquitaine. His siblings were Joan of England, John Lackland and Henry.

- "Richard was said to be very attractive; his hair was between red and blond, and he was light-eyed with a pale complexion." https://en.wikipedia.org/wiki/Richard_I_of_England

- "He was tall, of elegant build; the color of his hair was between red and gold; his limbs were supple and straight. He had long arms suited to wielding a sword. His long legs matched the rest of his body."
From the Itinerarium peregrinorum et gesta regis Ricardi by Richard de Templo
http://freepages.misc.rootsweb.ancestry.com/~byza…/Mdv.html… 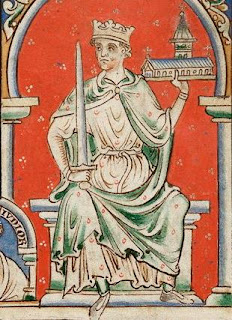