Joan of England (1165 – 1199). Queen consort of Sicily and countess consort of Toulouse. She was the seventh child of Henry II, King of England and his queen consort, Eleanor of Aquitaine. Her siblings were Richard the Lion Heart, Henry and John Lackland.

- "She grew up to be quite beautiful with blonde/reddish hair and nice features. "
http://royalwomen.blogspot.it/…/joan-of-england-queen-of-si…


- "Joan was attractive - fair with brown but faintly reddish hair - and, according to what few accounts exist, rather intelligent even as a child." http://www.bestofsicily.com/mag/art142.htm 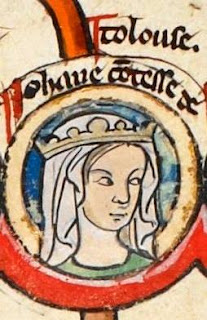