Oliver Burgess Meredith (1907 – 1997). American actor, director, producer and writer. Active for more than six decades, Meredith has been called "a virtuosic actor" and "one of the most accomplished actors of the century". A lifetime member of the Actors Studio by invitation, he won several Emmy. He was the first male actor to win the Saturn Award for Best Supporting Actor twice, and was nominated for two Academy Awards.
He established himself as a leading man in Hollywood with critically acclaimed performances as George Milton in Of Mice and Men (1939), Ernie Pyle in The Story of G.I. Joe (1945), and the narrator of A Walk in the Sun (1945).
Meredith was known later in his career for his appearances on The Twilight Zone and for portraying arch-villain The Penguin on the 1960s TV series Batman and boxing trainer Mickey Goldmill in the Rocky film series. For his performances in The Day of the Locust (1975) and Rocky (1976), he received nominations for the Academy Award for Best Supporting Actor.
He was married to actress Paulette Goddard.
He was a descendant of the house of Howard through Catherine Howard, the fifth wife of King Henry VIII.

- "Burgess Meredith, red-headed dynamo of the stage and screen..." https://books.google.it/books… 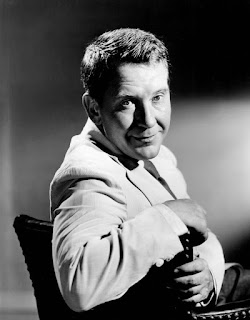