Samuel Hamilton Walker (1817 – 1847). American army officer. He served as Texas Ranger captain and officer of the Republic of Texas and the United States armies. Walker served in several armed conflicts, including the American Indian Wars and the Mexican-American wars.
Walker is best known as the co-inventor of the famous Walker Colt revolver, along with arms manufacturer Samuel Colt. Walker is said to have self-funded a trip to New York City to meet with Colt and proposed to him the concept of a weapon based on the then-popular five-shot Colt Paterson revolver, with many enhancements such as adding a sixth round, being powerful enough to kill either a man or a horse with a single shot and quicker to reload.
Colt asked Walker to help him with the design and used his prototype and Walker's improvements to create a new design. Blake produced the first thousand-piece order, known as the Colt Walker. The company then received an order for an additional one thousand more. Colt's share of the profits was $10.
By 1847, the new revolver was available. The United States Army's mounted rifle companies were issued them, and they proved extremely effective.


- "He was slightly built, and beardless, with sandy reddish hair and an easygoing demeanor."  https://www.texasmonthly.com/…/two-sams-and-their-six-shoo…/ 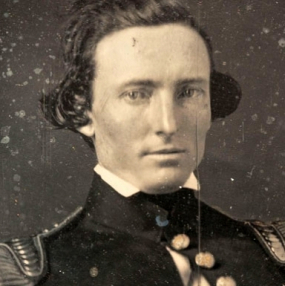