Reginald Aubrey Fessenden (1866 – 1932). Canadian-born inventor, who did a majority of his work in the United States. During his life he received hundreds of patents in various fields, most notably ones related to radio and sonar.

Fessenden is best known for his pioneering work developing radio technology, including the foundations of amplitude modulation (AM) radio. His achievements included the first transmission of speech by radio (1900), and the first two-way radiotelegraphic communication across the Atlantic Ocean (1906). In 1932 he reported that, in late 1906, he also made the first radio broadcast of entertainment and music, although a lack of verifiable details has led to some doubts about this claim.

- "Fay had met the imposing, red-haired Canadian a few years before at Bell Labs..." https://www.sciencehistory.org/.../reginald-fessenden-and...
- "When these characteristics emanated from a ginger-colored hair and bearded person..." https://themarconifamily.pbworks.com/.../Fessenden%20and...
- "He certainly struck a fine figure, being over 6ft, sporting a head of ginger hair and a full beard." http://www.radiocom.net/Fessenden/fessenden_b.pdf 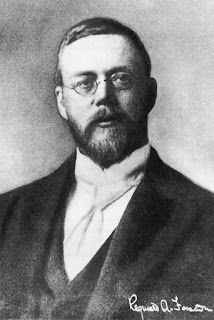