Darlene Conley (1934 – 2007). American actress.
Conley's career spanned fifty years, but she was best known for her performances in daytime television, and in particular, for her portrayal of larger-than-life fashion industrialist Sally Spectra on The Bold and the Beautiful. Conley played the role from 1989 until her death seventeen years later. Darlene's character Sally is the only soap opera character to be displayed at Madame Tussaud's wax figures galleries in Amsterdam and Las Vegas.

- “Without telling anybody, I got on the Illinois Central railroad by myself and went downtown to the audition,” she says. “Because I was Irish, and I had red hair, freckles and thick glasses, I thought I was wonderful.” http://www.angelfire.com/tv/BnBtINTCONLEY/

- "'I had an Irish brogue, red hair and I wore glasses, but I got started acting and I lasted by not knowing that I wouldn`t succeed.'' https://webcache.googleusercontent.com/search… 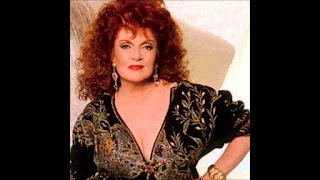