Charles Keeney Hamilton (1885 – 1914). American pioneer aviator nicknamed the "crazy man of the air".He was, in the words of the U.S. Centennial of Flight Commission, "known for his dangerous dives, spectacular crashes, extensive reconstructive surgeries, and ever present cigarette" and was "frequently drunk". He survived more than 60 crashes.

Hamilton became the first to fly in the state of Washington, when he piloted the Reims Racer over Seattle on March 11. On June 13, 1910, he won a prize of $10,000, sponsored by The New York Times and the Philadelphia Public Ledger, for being the first to fly from New York City to Philadelphia and back, the first flight between two major US cities.
He received a hero's welcome in his hometown of New Britain and, on July 2, 1910, made "the first public flight in the State" there. It was also the first in New England.
In Nashville, he made the first night flight in America, remaining aloft 25 minutes before developing engine trouble.
- "... Glenn Curtiss revealed to the press that his other flyer was a thin, red-haired daredevil named Charles K. Hamilton..."  https://books.google.it/books?id=ecMgDgAAQBAJ&pg=PT91...
- "... Charles K. Hamilton, who was 'no matinee idol': he was 'small and freckled and red-headed'..."  https://books.google.it/books?id=1W_z196x1_QC&pg=PT185...
- "... was small in stature, had blazing red hair and big ears."  https://books.google.it/books?id=M8q0Fgue-XMC&pg=PA11... 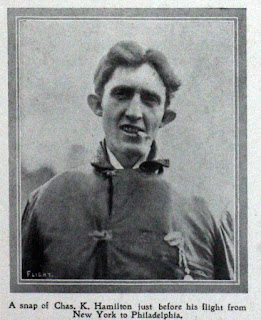