Franklin Pierce (1804 – 1869). 14th president of the United States, serving from 1853 to 1857. A northern Democrat who believed that the abolitionist movement was a fundamental threat to the unity of the nation, he alienated anti-slavery groups by supporting and signing the Kansas–Nebraska Act and enforcing the Fugitive Slave Act, yet these efforts failed to stem conflict between North and South. The South eventually seceded and the American Civil War began in 1861.

He is a distant relative of Barbara Bush's father, Marvin Pierce.
- "... with a shock of unruly, curly dark auburn hair flowing over his forehead." https://books.google.it/books?id=0K-nCwAAQBAJ&pg=PA165...
- "For another, with dark auburn hair, blue eyes, a square jaw and a slender, muscular physique, Franklin Pierce was a strikingly handsome man." https://books.google.it/books?id=lJo4oi9cvJEC&pg=PA16... 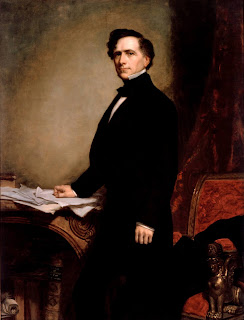