John Bell Hood (1831 – 1879). Confederate general during the American Civil War. Although brave, Hood's impetuosity led to high losses among his troops as he moved up in rank.
After the war, Hood moved to Louisiana and worked as a cotton broker and in the insurance business. His business was ruined by a yellow fever epidemic in New Orleans during the winter of 1878–79 and he succumbed to the disease himself, dying just days after his wife and oldest child, leaving ten destitute orphans. 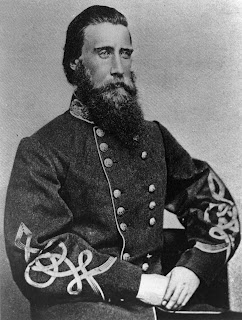