Hubert Prior "Rudy" Vallée (1901 – 1986). American singer, actor, bandleader, and radio host. He was one of the first modern pop stars of the teen idol type.
His father was of Canadian origins and his mother of Irish origins.
After graduation, he formed Rudy Vallée and the Connecticut Yankees, having named himself after saxophonist Rudy Wiedoeft. He became one of the first crooners. Singers needed strong voices to fill theaters in the days before microphones. Crooners had soft voices that were suited to the intimacy of radio. Vallée's trombone-like vocal phrasing on "Deep Night" would inspire Bing Crosby, Frank Sinatra, and Perry Como to model their voices on jazz instruments.
Vallée was one of the first celebrity pop stars. Flappers pursued him wherever he went and his live appearances were usually sold out.
In 1929, Vallée made his first feature film, The Vagabond Lover for RKO Radio. His first films were made to cash in on his singing popularity. While his initial performances were rather wooden, his acting greatly improved in the late 1930s and 1940s, and by the time he began working with Preston Sturges in the 1940s, he had become a successful comedic supporting player. He appeared opposite Claudette Colbert in Sturges's 1942 screwball comedy The Palm Beach Story. Other films in which he appeared include I Remember Mama, Unfaithfully Yours and The Bachelor and the Bobby-Soxer.


- "His body had thickened a bit, but his eyes were alive and when he smiled, which was often, it was the familiar Vallee smile, consuming his face under a swatch of thinning but still very red hair."  https://www.latimes.com/…/la-xpm-1986-07-04-mn-741-story.ht… 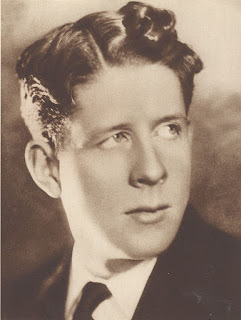 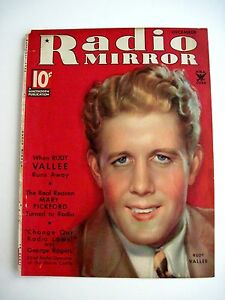