Geraldine Mary Fitzgerald (1913 – 2005). Irish actress and a member of the American Theater Hall of Fame.
Fitzgerald began her acting career in 1932 at Dublin's Gate Theatre and her success led her to New York and the Broadway stage in 1938. She made her American debut opposite Orson Welles in the Mercury Theatre production of Heartbreak House. Hollywood producer Hal B. Wallis saw her in this production and subsequently signed her to a contract with Warner Bros. She had two significant successes in 1939: a role in the Bette Davis film Dark Victory, and an Academy Award nomination for her supporting performance as Isabella Linton in William Wyler's Wuthering Heights.
Her carreer lasted until the 80s, while in the 70s she returned to stage acting.
Fitzgerald married Sir Edward Lindsay-Hogg, 4th Bt. in London on November 18, 1936. She was granted a divorce in Reno on August 30, 1946, after three years of separation. She had one son, director Michael Lindsay-Hogg, by her first marriage, and a daughter, Susan Scheftel, by her second marriage to American businessman Stuart Straus Scheftel, grandson of Ida and Isidor Straus.


- "Geraldine Fitzgerald, the red-headed beauty of films from long ago, was coming to Pittsburgh."  https://winningwriters.com/…/geraldine-fitzgerald-saint-pat…

- "Was a redhead when she first went to Hollywood, but her hair photographed dark, so people have always assumed she was a brunette. In her only early color film, Wilson (1944), her hair was turned brown for her portrayal of Edith Wilson, so the public never saw her natural red hair."  https://www.imdb.com/name/nm0280242/bio

- "Her longtime friend Norman Lloyd, also of the Mercury Theatre, said about her, “She was a staggeringly beautiful girl with the most delightful speech, a slight Irish tinge, not a thick brogue, and this glorious red hair.”  https://irishamerica.com/2005/10/geraldine-fitzgerald/ 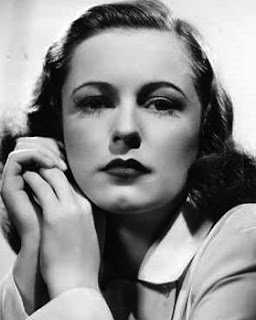