Julia Lennon (born Stanley; 1914 – 1958). Mother of English musician John Lennon, who was born during her marriage to Alfred Lennon. After complaints to Liverpool's Social Services by her eldest sister, Mimi Smith (née Stanley), she handed over the care of her son to her sister. She later had one daughter after an affair with a Welsh soldier, but the baby was given up for adoption after pressure from her family. She then had two daughters, Julia and Jackie, with John 'Bobby' Dykins. She never divorced her husband, preferring to live as the common-law wife of Dykins for the rest of her life.
She was known as being high-spirited and impulsive, musical, and having a strong sense of humour. She taught her son how to play the banjo and ukulele. She kept in almost daily contact with John, and when he was in his teens he often stayed overnight at her and Dykins' house. On 15 July 1958, she was struck down and killed by a car driven by an off-duty policeman, close to her sister's house at 251 Menlove Avenue. Lennon was traumatised by her death and wrote several songs about her, including "Julia" and "Mother".


- "At the Trocadero club, a converted cinema on Camden Road, Liverpool, he first saw an "auburn-haired girl with a bright smile and high cheekbones"; Julia Stanley."  https://en.wikipedia.org/wiki/Julia_Lennon

- "Julia Stanley Lennon’s auburn hair was one of her best features..."  http://www.rebeatmag.com/9-myths-about-john-lennon-and-the…/

- "Julia Stanley - red-haired, exuberant, musical and headstrong - was only 14 when she began seeing a hotel bellboy, Alfred Lennon, to her parents' chagrin."  https://www.independent.co.uk/…/john-lennon-what-really-hap… 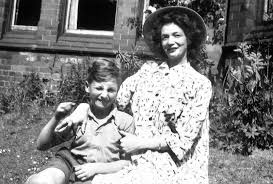