Leo Brent Bozell Jr. (1926 – 1997). American conservative activist and Roman Catholic writer.
His wife was Patricia Lee Buckley, sister of William F. Buckley, Bozell's best friend at Yale.
The two of them wrote the book McCarthy and His Enemies (1954), a defense of Senator Joseph McCarthy.
In 1958, Bozell ran for the Maryland House of Delegates but lost. He later worked as a speechwriter for Senator Barry Goldwater, for whom he ghostwrote the 1960 book The Conscience of a Conservative.


- "A young, energetic red-haired Yalie from Omaha", as he is described in Before the Storm: Barry Goldwater and the Unmaking of the American Consensus..."  https://en.wikipedia.org/wiki/L._Brent_Bozell_Jr.

- "Growing into a lanky boy with strong features and striking red hair..."  https://books.google.it/books… 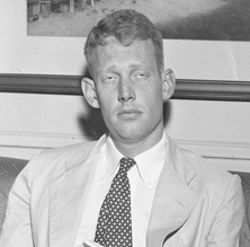