Robert Francis Kennedy (1925 – 1968). American politician and lawyer who served as the 64th United States Attorney General from January 1961 to September 1964, and as a U.S. Senator from New York from January 1965 until his assassination in June 1968.
He was appointed United States Attorney General after his brother John's successful election and served as the closest advisor to the President from 1961 to 1963.
He authored his account of the Cuban Missile Crisis in a book titled Thirteen Days. After his brother's assassination, he remained in office in the Johnson Administration for several months. He left to run for the United States Senate from New York in 1964 and defeated Republican incumbent Kenneth Keating.
In 1968, Kennedy became a leading candidate for the Democratic nomination for the presidency by appealing to poor, African American, Hispanic, Catholic and young voters. His main challenger in the race was Senator Eugene McCarthy. Shortly after winning the California primary around midnight on June 5, 1968, Kennedy was mortally wounded when shot with a pistol by Sirhan Sirhan, a 24-year-old Palestinian, allegedly in retaliation for his support of Israel following the 1967 Six-Day War. Kennedy died the following morning.
Son of Joe Kennedy. His paternal grandfather was P. J. Kennedy. Brother of Patricia Kennedy Lawford.


- "He wore his thick, auburn hair longer than many men of the time..."  https://books.google.it/books…

- "What I remember most was how vivid he was: his long, tousled red hair, his bright white (and toothy) smile..."  https://wfpl.org/forty-five-years-after-his-death-robert-f…/

- "I was close enough to notice his reddish chestnut colored hair."  https://translate.google.it/translate…

- "There stood this thin man with reddish hair."  https://dailygazette.com/…/memories-of-rfk-the-capital-regi…

- "... challenging the red-haired Kennedy to call for the release of Huey Newton..."  https://books.google.it/books… 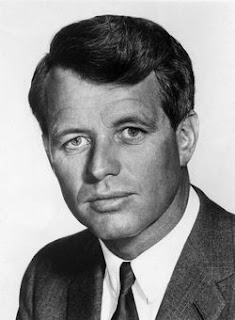