Spencer Tracy (1900 - 1967). American actor. oted for his natural style and versatility. One of the major stars of Hollywood's Golden Age, Tracy won two Academy Awards for Best Actor from nine nominations, sharing the record for nominations in that category with Laurence Olivier. He had a lifelong relationship with Katharine Hepburn.

"And who could have forecast that the red hair would turn pure white?"
https://books.google.it/books

- "Tracy with his thick red hair, freckles all over white skin and bad teeth." http://www.jugendohnefilm.com/george-cukor-just-squeezing-it-out-of-other-people/ 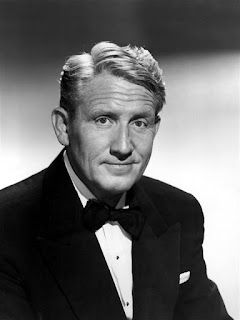