Katharine Hepburn (1907 - 2003). American actress. Known for her fierce independence and spirited personality, Hepburn was a leading lady in Hollywood for more than 60 years. She appeared in a range of genres, from screwball comedy to literary drama, and she received four Academy Awards—a record for any performer—for Best Actress. In 1999, Hepburn was named by the American Film Institute as the greatest female star of Classic Hollywood Cinema.
She had a lifelong relationship with Spencer Tracy.

- "On May 12, 1907, the Hepburns had their second child, Katharine Houghton Hepburn. Kit was thrilled about the newborn daughter's red hair and asked the nurse to hold her up to the window so Tom could see it. 'Yes, it's red!' she shouted to Tom." https://books.google.it/

- "She washes her own red hair, plans her own clothes, shoulders her own wherever she is going."  https://breac.nd.edu/articles/maeve-brennan-celebrity-and-harpers-bazaar-in-the-1940s/ 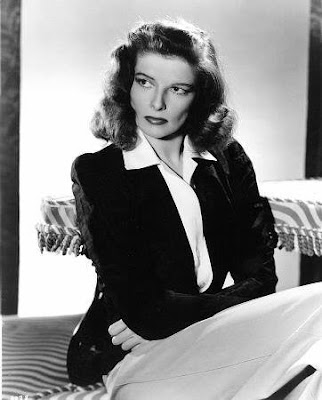