John Fitzgerald Kennedy (1917 – 1963). American politician who served as the 35th president of the United States from January 1961 until his assassination in November 1963. Kennedy served at the height of the Cold War, and the majority of his work as president dealt with managing relations with the Soviet Union and Cuba. A Democrat, Kennedy represented Massachusetts in the U.S. House of Representatives and Senate prior to becoming president.

While in the Senate, Kennedy published his book Profiles in Courage, which won a Pulitzer Prize for Biography.
He was the first Catholic elected president.

- "The hair is reddish-brown and abundant..." https://www.archives.gov/…/warren-commissio…/appendix-09.pdf

- " I remember how red his hair was." http://www.politico.com/…/my-handshake-with-jfk-fort-worth-…

- "She [called him] "this congressman with reddish-brown hair I met on the train."  https://books.google.fr/

- "In his mid-forties, Kennedy was about six foot one in height, with a full head of brownish-red hair."   https://books.google.it/ 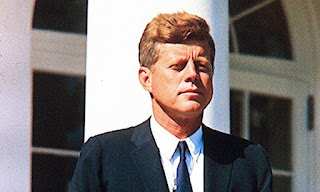