Ernest Paul "Ernie" Bushmiller, Jr. (1905 – 1982). American cartoonist, best known for creating the daily comic strip Nancy, which premiered in 1938. His work is noted for its simple graphic style. In 1976 he received the Reuben Award from the National Cartoonists Society for his work on Nancy.

- "Although his red hair is turning gray and he is beginning to thicken about the midriff, Ernie has a boyish grin that belies his 43 years."  http://strippersguide.blogspot.com/…/news-of-yore-1949-erni…

- "A youth with red hair and blue eyes, Ernie dropped out of high school after six months."  https://books.google.it/books… 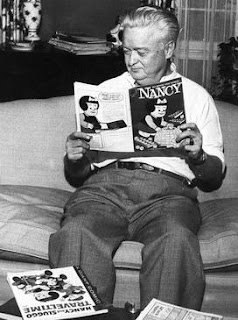