William John Burns (1861 – 1932). Known as "America's Sherlock Holmes," he is famous for having conducted a private investigation clearing Leo Frank of the murder of Mary Phagan, and for serving as the director of the Bureau of Investigation (BOI) (predecessor to the FBI) from August 22, 1921 to May 10, 1924. As a young man, Burns performed well as a Secret Service Agent and parleyed his reputation into the William J. Burns International Detective Agency, now a part of Securitas Security Services USA. A combination of natural ability as a detective combined with an instinct for publicity made Burns a national figure. His exploits made national news, the gossip columns of New York newspapers, and the pages of detective magazines, in which he published "true" crime stories based on his exploits.


- "In 1903 he was forty-four years old, red-haired with a bristling mustache, stocky, usually decked out in a three-piece suit with a gold watch chain..." https://books.google.it/

- "A short, stout man, with a luxuriant mustache and a shock of red hair..."  https://books.google.it/books…

- "His good stock of red hair and a fine moustache turning upwards in a rakish twist..."  https://books.google.it/books… 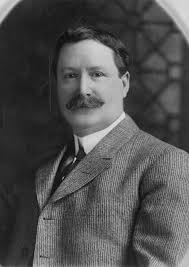