Norah Lange (1905 – 1972). Argentine author of Norwegian descent, associated with the Buenos Aires avant garde of the 1920s and 1930s.
A member of the Florida group, which also included figures such as Oliverio Girondo (whom she married in 1943) and Jorge Luis Borges (who dedicated an article to her in his first book of prose, Inquisiciones), she published in the "ultraist" magazines Prisma, Proa and Martín Fierro.
Her ultramodernist poetry influenced other well-known Argentine writers such as Nydia Lamarque, Maria Elena Walsh, Maria Dhialma Tiberti, and Ines Malinow.
Her 1950 novel Personas en la sala, was published in the English as People in the Room in 2018.
In 1958, SADE (the Argentine Society of writers) awarded her their Grand Prize of Honor.


- "A particularly striking attribute of Norah Lange's was her mane of red hair, an exotic attribute in a Latin country and one associated in the Hispanic world with devilment and mischief. [...] Norah's, then, was a complex allure: her red hair spoke of passion, but her pale, Scandinavian looks called to mind the purity of an angel..."  https://www.theguardian.com/books/…/sep/11/biography.fiction

- "... Lange became a modernist muse, lauded as much for her Nordic looks and flaming red hair (she has been described both as a “valkyrie” and as the ultraístas’s “angel and siren”) as she was for her playful spirit and her accomplishments as an author."  http://www.musicandliterature.org/…/norah-langes-people-in-… 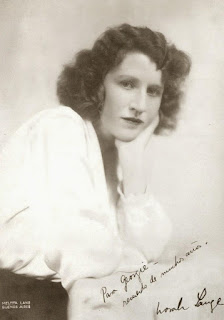