William "Billy" Ward (1993 − 2013). Australian amateur boxer selected for the 2012 Summer Olympics in the light flyweight division.
In 2012 he stepped up to open competition and dropped a weight division to light flyweight. He won both the Australian title and the Oceania Olympic Qualification tournament that year to earn a place at the London Olympic Games.

- "Ward was noted for his short stature and curly red hair. [...] The Gladstone Observer reported that when he returned to Gladstone after winning the Oceania qualifier, he was met by a group of fans wearing red curly wigs."  https://en.wikipedia.org/wiki/Billy_Ward_(boxer)


- "Billy, affectionately known as Red for his iconic curly hair, became a household name when he represented Australia in the 2012 London Olympic Games."  https://webmailtin.pc.tim.it/cp/ps/Main/login/SSOLogin 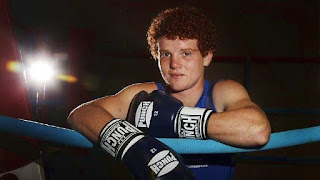