Maria Karolina Sobieska (1697 – 1740). Polish noblewoman, daughter of Jakub Ludwik Sobieski. Known as Marie Charlotte or only Charlotte, she was the Princess of Turenne and later Duchess of Bouillon by marriage. Charlotte was the last surviving member of the House of Sobieski.
Her younger sister Clementina married the Jacobite pretender James Francis Edward Stuart.

- "She was a pretty little thing, tall, red-haired and well-shaped; she made use of every opportunity to highlight the charms of her figure."  http://www.wilanow-palac.pl/michasienko_and_charlotta.html 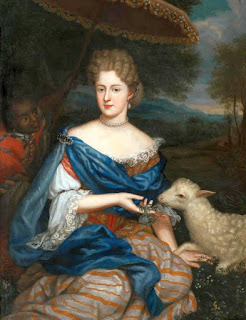