Helen Menken (1901 – 1966). American actress.
She was born Helen Meinken to a German-French father and an Irish-born mother. Her parents were deaf, and her early communication came via sign language. She did not begin talking until age 4.
Her greatest stage triumphs were Seventh Heaven in 1922–1924; Mary of Scotland in 1933–1934 as Elizabeth I and The Old Maid in 1935.
The first of her four husbands was actor Humphrey Bogart. She was Bogart's first wife.


- "The Los Angeles Times wrote in 1932 that "a pallid young woman with distinguishing red hair and intense brown eyes..."  https://www.oregonlive.com/…/helen_menkens_portland_gift_th…

- "She had moppish hair, a sort of auburn red, and her cupid's-bow mouth was just as expressive as her hands..."  https://books.google.it/books… 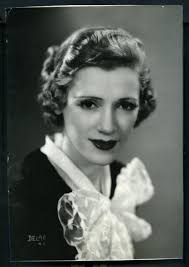