William Joseph Simmons (1880 – 1945). Founder of the second Ku Klux Klan on Thanksgiving of 1915.
When the New York World exposed violent affairs conducted by the Ku Klux Klan, Simmons was called to testify in front of the U.S. House Committee on Rules. Hearings began in October 1921 and lasted for over a week. Simmons distanced himself from violent events and stressed the Klan's fraternal nature. Congressional hearings ended with no direct consequences for the Klan, though Simmons lost his influence.
Having built up his own network of influence, Hiram Wesley Evans succeeded Simmons in the position of the Imperial Wizard in November 1922. Simmons was at the same time elected Emperor for life. The Klan started to decline after a peak of membership and influence in 1925. 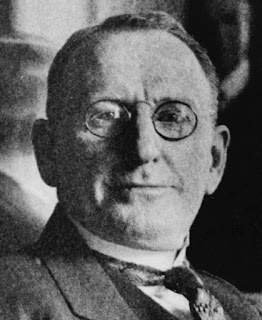