Charles Edward Springall (1925 – 2006), known professionally as Charlie Drake. English comedian, actor, writer and singer.
He was a popular comedian with children in his early years, becoming nationally known for his "Hello, my darlings!" catchphrase.
After serving in the Royal Air Force during the Second World War, Drake turned professional and made his television début in The Centre Show in 1953. He then joined his wartime comrade Jack Edwardes to form a double act, named 'Mick and Montmorency'.
He appeared in the television shows Laughter in Store (1957), Drake's Progress (1957–58), Charlie Drake In… (1958 to 1960) and The Charlie Drake Show (1960 to 1961), being remembered for his opening catchphrase "Hello, my darlings!" The catchphrase came about because he was short and so his eyes would often be naturally directly level with a lady's bosom. Because of this and because in his television work he preferred appearing with big-busted women, the catchphrase was born.

- "Although he originally tried to break into showbusiness as a singer, with his shock of red hair, 5ft1in stature and strained Cockney voice, it was perhaps inevitable that Drake would find more success as a comic."  https://www.chortle.co.uk/comics/c/327/charlie_drake/review 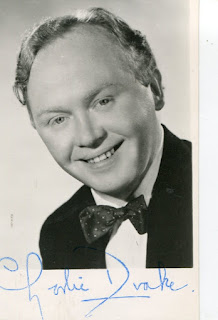