Marie Angélique de Scorailles (1661 – 1681). French noblewoman and one of the many mistresses of Louis XIV. A lady-in-waiting to his sister-in-law Elizabeth Charlotte, Princess Palatine, the Duchess of Orléans, she caught the attention of the Sun King and became his lover in 1679. She died two years later, most probably as a result of complications arising from childbirth.

- "She had golden red hair and classically perfect features and grey-blue eyes yet according to Liselotte she was not very clever."  http://royalsplendourinhistory.blogspot.com/…/marie-angeliq…


- "Her luxuriant hair was of a rich auburn, which in the sun appeared a blaze of gold."  https://books.google.it/books… 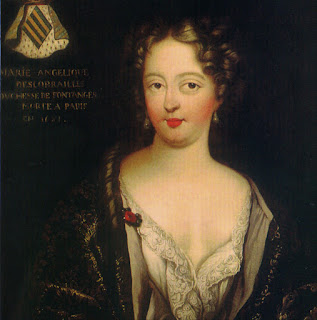