David Flusser (1917 - 2000). Israeli professor of Early Christianity and Judaism of the Second Temple Period at the Hebrew University of Jerusalem.

- "Flusser is a short stocky man, with sharp little cold green eyes that glint behind round-rimmed glasses, under modestly Mephistophelian eyebrows, and red hair that stands straight up from his forehead. [...] He has grown heavier since I last saw him and is thus even more extraordinary in appearance, with his red hair, his sharp little eyes..."  https://www.jerusalemperspective.com/11118/ 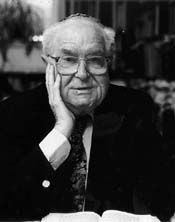